Bellingham Protect the Results Rally HAS BEEN POSTPONED

The Bellingham Protect the Results coalition met this evening to discuss the rally planned for this past Wednesday and rescheduled for tomorrow (Saturday, 11/7) at Maritime Heritage Park in Bellingham. We have decided to postpone the event and reactivate quickly if there is a real threat to the results of the national election.

So far, it appears the democratic process is working well, despite attempts by the Trump campaign to sow distrust of the electoral process in numerous states. State attorneys general and secretaries of state have shown that the electoral process is transparent, legal, and all valid votes are being counted. At this point we don’t see any dangerous actions that require a response from us. This may change.

Also, given the increase in coronavirus cases (the third day in a row with new cases more than 100,000 and the fourth day in a row of deaths more than 1,000), we feel that the health and safety of our participants in a large gathering is paramount. We feel gathering would be irresponsible unless there is a dire emergency.

We would like to express a huge “Thank You” to you who have signed up to stand up for democracy by attending the event. We’d also like to thank our team for the hard work they’ve put in to prepare for this event and to the 14 prospective speakers and performers who were scheduled to attend.

As we move forward, only we – all together – can brighten what some feel are dark days ahead. We are a community of people who may not always agree, but are united by the principles of fairness, inclusion, tolerance, and a just society for all. 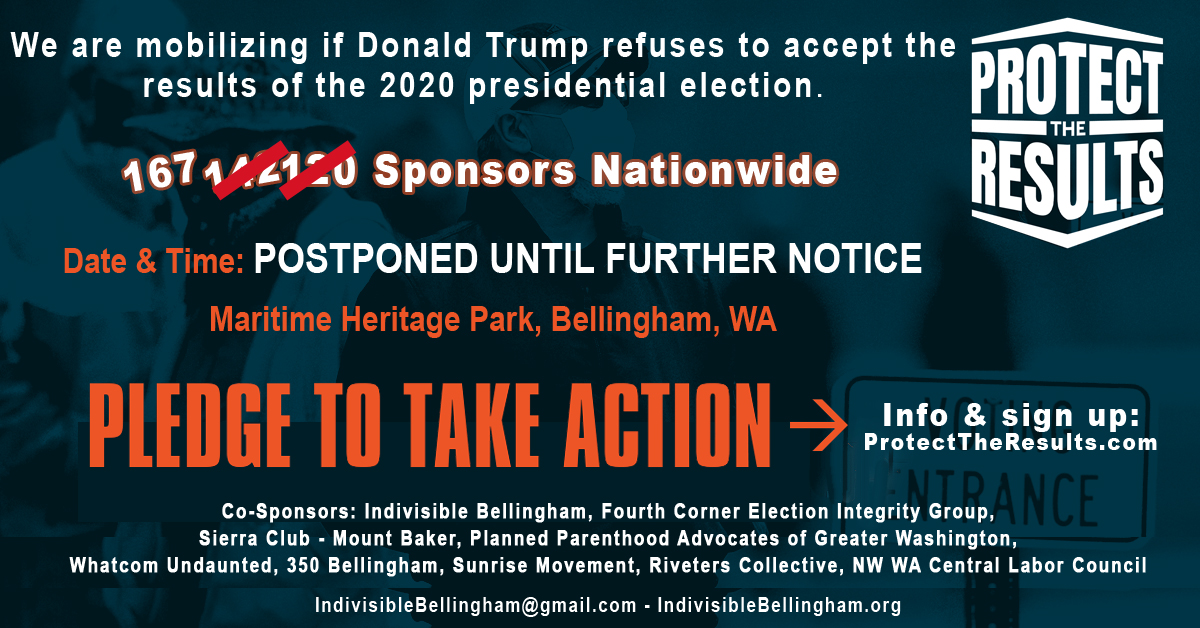 We won’t sugarcoat it. Every day it is becoming more clear that Trump will likely attempt to cling to power if he loses. News just broke that his campaign is in the process of discussing contingency plans to bypass election results and appoint loyal electors in battleground states where Republicans hold the legislative majority. While in any other time in American history this news may have come as a bombshell, this is now entirely predictable.

With an unprecedented level of vote-by-mail in November, we likely won’t know who won until days or even weeks after Election Day. Why does this matter? Well, Trump is likely to claim victory on election night regardless of the results and he will label mail-in ballots as a fraud.

Luckily, Indivisible Action has already been working on a contingency plan. It’s called Protect the Results — a joint effort between 100 (and counting!) partner organizations to prepare for a mass mobilization if Trump loses the election and refuses to leave office.

SIGN UP NOW to receive more information about a rally at Maritime Heritage Park soon after the Election Day.